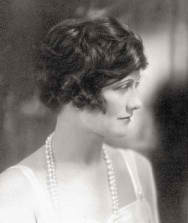 Early lifeChanel was born in Saumur, France. She was the second daughter of Albert Chanel and Jeanne Devolle, a market stallholder and laundrywoman respectively at the time of her birth. Her birth was declared by employees of the hospital in which she was born. They, being illiterate, could not provide or confirm the correct spelling of the surname and it was recorded by the mayor François Poitou as "Chasnel".[3] This misspelling made the tracing of her roots almost impossible for biographers when Chanel later rose to prominence.

Her parents married in 1883. She had five siblings: two sisters, Julie (1882–1913) and Antoinette (born 1887) and three brothers, Alphonse (born 1885), Lucien (born 1889) and Augustin (born and died 1891). In 1895, when she was 12 years old, Chanel's mother died of tuberculosis and her father left the family. Because of this, the young Chanel spent six years in the orphanage of the Roman Catholic monastery of Aubazine, where she learned the trade of a seamstress. School vacations were spent with relatives in the provincial capital, where female relatives taught Coco to sew with more flourish than the nuns at the monastery were able to demonstrate.

When Coco turned eighteen, she was obliged to leave the orphanage, and affiliated with the circus of Moulins as a cabaret singer. During this time, Chanel performed in bars in Vichy and Moulins where she was called "Coco." Some say that the name comes from one of the songs she used to sing, and Chanel herself said that it was a "shortened version of coquette, the French word for 'kept women," according to an article in The Atlantic.

Gabrielle Dorziat modelling a Chanel hat, May 1912. Published inLes Modes.[edit]Personal life and entry into fashionWhile she failed to get steady work as a singer, it was at Moulins that she met rich, young French textile heir Étienne Balsan, to whom she soon became an acknowledged mistress, keeping her day job in a tailoring shop. Balsan lavished on her the beauties of "the rich life": diamonds, dresses, and pearls. While living with Balsan, Chanel began designing hats as a hobby, which soon became a deeper interest of hers. "After opening her eyes," as she would say, Coco left Balsan and took over his apartment in Paris. Biographer Justine Picardie, in her 2010 study Coco Chanel: The Legend and the Life (Harper Collins), suggests that the fashion designer's nephew André Palasse—supposedly the only child of her sister Julie—may actually have been Chanel's child by Balsan.

In 1909 Chanel met and began an affair with one of Balsan's friends, Captain Arthur Edward 'Boy' Capel.[4] Capel financed Chanel's first shops and his own clothing style, notably his jersey blazers, inspired her creation of the Chanel look. The couple spent time together at fashionable resorts such as Deauville, but he was never faithful to Chanel.[5] The affair lasted nine years, but even after Capel married an aristocratic English beauty in 1918, he did not completely break off with Chanel. His death in a car accident, in late 1919, was the single most devastating event in Chanel's life.[6]A roadside memorial at the site of the accident was placed there by Chanel, who visited it in later years to place flowers there.[7]

Chanel became a licensed modiste (hat maker) in 1910 and opened a boutique at 21 rue Cambon, Paris named Chanel Modes.[8] Chanel's modiste career bloomed once theatre actress Gabrielle Dorziat modelled her hats in the F Noziere's play Bel Ami in 1912 (Subsequently, Dorizat modelled her hats again in Les Modes).[8] In 1913, she established a boutique in Deauville, where she introduced luxe casual clothes that were suitable for leisure and sport.[8] Chanel launched her career as fashion designer when she opened her next boutique, titled Chanel-Biarritz, in 1915,[8]catering to the wealthy Spanish clientele who holidayed in Biarritz and were less affected by the war.[9] Fashionable like Deauville, Chanel created loose casual clothes made out of jersey, a material typically used for men's underwear.[8] By 1919, Chanel was registered as a couturiere and established her maison de couture at 31 rue Cambon.[8]

Later in life, she concocted an elaborate false history for her humble beginnings. Chanel would steadfastly claim that when her mother died, her father sailed for America to get rich and she was sent to live with two cold-hearted spinster aunts. She even claimed to have been born in 1893 as opposed to 1883, and that her mother had died when Coco was two instead of twelve.

In 1920, she was introduced by ballet impresario Sergei Diaghilev to Igor Stravinsky, composer of The Rite of Spring, to whom she extended an offer for him and his family to reside with her. During this temporary sojourn it was rumoured that they had an affair.[citation needed]

Perfume Chanel No.5In 1924, Chanel made an agreement with the Wertheimer brothers, Pierre and Paul, directors of the eminent perfume house Bourgeois since 1917, creating a corporate entity, "Parfums Chanel." The Wertheimers agreed to provide full financing for production, marketing and distribution of Chanel No. 5. For ten percent of the stock, Chanel licensed her name to "Parfums Chanel" and removed herself from involvement in all business operations.[10] Displeased with the arrangement, Chanel worked for more than twenty years to gain full control of "Parfums Chanel."[10] She proclaimed that Pierre Wertheimer was “the bandit who screwed me.”[11]

Coco dated some of the most influential men of her time, but she never married. The reason may be found in her answer, when asked why she did not marry the Duke of Westminster: "There have been several Duchesses of Westminster. There is only one Chanel."[12]

In 1925, Vera Bate Lombardi, née Sarah Gertrude Arkwright,[13] reputedly the illegitimate daughter of the Marquess of Cambridge,[13] became Chanel's muse, and also her liaison to a number of European royal families. Chanel established the English look based upon Lombardi's personal style. Lombardi also had the highest possible social connections. She introduced Chanel to her uncle, the Duke of Westminster, her cousin, the Duke of Windsor, and many other aristocratic families.[14] In 1927 she built Villa La Pausa in Roquebrune on the French Riviera hiring the architect Robert Streitz. The villa has a staircase and a patio inspired by her orphanage, Aubazine. La Pausa has been partially replicated at the Dallas Museum of Art to welcome the Reves collection and part of Chanel's original furniture for the house.[15]

It was in 1931 while in Monte Carlo that Chanel made the acquaintance of Samuel Goldwyn. The introduction was made through a mutual friend, TheGrand Duke Dmitri Pavlovich, cousin to the last czar of Russia, Nicolas II. Goldwyn offered Chanel a tantalizing proposition. For the sum of a million dollars (approximately seventy-five million today), he would bring her to Hollywood twice a year to design costumes for MGM stars. Chanel accepted the offer. En route to California from New York traveling in a white train car, which had been luxuriously outfitted specifically for her use, she was interviewed by Colliers magazine in 1932. Chanel said she had agreed to the arrangement to "see what the pictures have to offer me and what I have to offer the pictures."[16]

[edit]World War IIIn 1939, at the beginning of World War II, Chanel closed her shops. She believed that it was not a time for fashion.[9] During the German occupation Chanel resided at the Hotel Ritz, which was also noteworthy for being the preferred place of residence for upper echelon German military staff. She also maintained an apartment above her couture house at 31 rue Cambon. During that time she was criticized for having an affair with Hans Günther von Dincklage, a German officer and Nazi spy who arranged for her to remain in the hotel.

World War II, specifically the Nazi seizure of all Jewish owned property and business enterprises provided Chanel with the opportunity to gain the full monetary fortune generated by "Parfums Chanel" and its most profitable product, Chanel No. 5. The directors of "Parfums Chanel," the Wertheimers, were Jewish, and Chanel used her position as an “Aryan” to petition German officials to legalize her right to sole ownership. On 5 May 1941, she wrote to the government administrator charged with ruling on the disposition of Jewish financial assets. Her grounds for proprietary ownership were based on the claim that “Parfums Chanel “is still the property of Jews”…and had been legally “abandoned” by the owners.[17] “I have,” she wrote, “an indisputable right of priority…the profits that I have received from my creations since the foundation of this business…are disproportionate…[and] you can help to repair in part the prejudices I have suffered in the course of these seventeen years.”[18] Chanel was not aware that the Wertheimers, anticipating the forthcoming Nazi mandates against Jews had, in May 1940, legally turned control of “Parfums Chanel” over to a Christian, French businessman and industrialist, Felix Amiot.[17]

Ultimately, the Wertheimers and Chanel came to a mutual accommodation, re-negotiating the original 1924 contract. On 17 May 1947, Chanel received wartime profits of Chanel No. 5 in the amount of some nine million dollars in today’s money, and in the future her share would be two percent of all Chanel No. 5 sales worldwide. The financial benefit to herself would be enormous. Her earnings would be in the vicinity of twenty-five million dollars a year, making her at the time one of the richest women in the world.[19][20] Chanel’s friend and biographer Marcel Haedrich provided a telling estimation of her wartime interaction with the Nazi regime: “If one took seriously the few disclosures that Mademoiselle Chanel allowed herself to make about those black years of the occupation, one’s teeth would be set on edge.”[21]

In 1943, after four years of professional separation, Chanel contacted Lombardi, who was living in Rome. She invited Lombardi to come to Paris and renew their work together. This was actually a cover for "Operation Modellhut," an attempt by Nazi spymaster Walter Schellenberg to make secret contact with Lombardi's relative Winston Churchill.[14][22] When Lombardi refused, she was arrested as a British spy by the Gestapo. Chanel was later charged as a collaborator, but avoided trial due to intervention by the British Royal family.[14]

Haute Couture suit circa 1960, designed by Chanel.Chanel was a very close friend of Walter Schellenberg to the extent that when he died of cancer penniless in Turin, Chanel paid for his funeral.

Some references[23] suggest that Coco Chanel had close contact with another Nazi, Walter Kutschmann, who was responsible for the murder of thousands of Poland's Jews early in World War II. He was transferred to France in 1943 where he became Chanel's Paris SS contact. Kutschmann made frequent trips to Spain with Chanel with large sums of money passing between them.[24]

[edit]Later years and deathIn 1945, she moved to Switzerland, eventually returning to Paris in 1954, the same year she returned to the fashion world.[9] The re-establishment of her couture house in 1954 was fully financed by Chanel’s old nemesis in the perfume battle, Pierre Wertheimer. This new contractual agreement would also allow Wertheimer to maintain ownership of “Parfums Chanel.” In return, Wertheimer agreed to an unusual arrangement proposed by Chanel herself, attempting to revive her youthful years as the kept woman of wealthy men. Wertheimer would pay for all of Chanel’s expenses from the large to the trivial for as long as she lived.[25]

Her new collection did not have much success with the Parisians because of her relationship with the Nazis; However, it was applauded by the British and Americans, who became her faithful customers.[26]

In early 1971 Chanel, then eighty-seven years old, was tired and ailing but continued to adhere to her usual schedule, overseeing the preparation of the spring collection. She died on Sunday 10 January, at the Hotel Ritz where she had resided for more than thirty years.[27] She had gone for a long drive that afternoon and, not feeling well, had retired early to bed